"SELF" PROJECTION NO.5 and the silence that speaks //AGDAM, NAGORNO KARABAKH//

Dirty, tired and eager for comfort, we took a few days’ rests in Yerevan, the capital of Armenia. We washed our clothes, scraped the dirt from our bodies, a long and arduous journey has given us. We took the time to process and evaluate all the moments that happened along the way. Clean, rested and filled with new energy, we quickly craved for a life of travel. We went towards a country which is not recognized by the UN Member State, only recognized by three unrecognized countries, namely Transnistria, Abkhazia and South Ossetia. Nagorno-Karabach or Artsakh after Armenian is a territory between Armenia and Azerbaijan and is considered a self-proclaimed state. The fierce and bloody war that raged between 1989 and 1994 left deep scars. Even today, it looks as if the war has not ended. The conflict between Armenia and Azerbaijan is still present, and tensions are present in this military country. Nevertheless, entry into Nagorno-Karabakh is no problem for EU passport holders. A long serpentine route winds past many mines that mercilessly take what was once the property of nature. We crossed the border. There, a view of the soldiers fishing from the crystal clear mountain stream awaited us. One was holding a fishing rod, the other was breaking bread, the third was throwing that bread into the water, and the rest were watching and eagerly waiting for the fish to get caught. The soldier in the little booth took all the time in the world to check our passports.  He thoroughly scanned our passports. He gave us the forms to fill. In addition to standard information, in capital letters were written places that tourists could visit. In addition, it said that all other places were strictly prohibited. Because we didn’t have an exact plan for what we wanted to visit, we ticked those places that we found most appealing. Who will check at all, we thought. After lengthy bureaucratic copying of information from one book to another, we got a visa to enter this self-proclaimed country. The visa was not glued to the passport, only inserted into it, because if we wanted to visit Azerbaijan, they would not let us there if they saw that we had visited Nagorno-Karabach, which they claim was forcibly taken away by the Armenian army. We drove into a narrow gorge full of patriotic monuments to war heroes, abandoned tanks, graffiti on the rocks – the land of heroes. It was bizarre that in addition to the military bases at every turn, this land offers tourists predetermined attractions, which magnify and support only one side of the conflict. Just a few kilometres from the old Armenian fortress, one of the attractions, where we spent the night, lies the city of Agdam, just off the Azerbaijani border. The city was home to more than 40,000 so-called Azer, and today it is considered one of the largest demolished cities in the world. It lies in the so-called “buffer” zone, which means that the border is still not fully defined. Given the proximity and we read that some bold tourists managed to secretly visit this place we also tried our luck. If we run into soldiers, we will just tell them that we got lost while looking for nearby tourist attractions. And we went on our way. Villages along the way were demolished and soldiers were seen guarding bunkers. There were no other people. We were on the road and the void around us was getting bigger. As we approached the city,  everything was demolished and the road got worse.

We saw a checkpoint in front of us and quickly accepted that we will not come any further. We have slowly driven in and saw a group of soldiers right in the middle of a meeting. We drove past them, wave to them and pretend to be there with permission. They looked at us for a moment and quickly return to their tasks. We look at each other and driven away with increased adrenaline. In the distance, we saw two minarets, which are part of the old Persian mosque, the only building in the city that has not been demolished. To visit the mosque was our goal. We drove into town and there is no end to the devastation. Demolished buildings, dug trenches, road barricades. At every turn, one can realise how cruel and senseless war is. We are trying to imagine what life was like here, living in peace. It is inconceivable how a person can do this to a fellow human being. The extent of the devastation is inexplicable. We reach the last intersection that separates us from the mosque. On the right, we see a military base. Just when we want to get into the intersection unnoticed as possible, the route crossed a convoy of military vehicles. The first car to drive past is a military police ATV. The seemingly strict soldier shows us that we shouldn’t be here and that we should turn back. Just behind him drove military trucks full of armed soldiers who kindly wave. What do they have to think about when they see our “special” van? So much for staying unnoticed. It takes a while for everyone to drive past us, and we hesitate what to do. As the last one passes by, we are left alone in silence and emptiness. A mosque is in front of us and we say to ourselves that if we have come this far, then drive across the intersection and take a quick look at it. We drive off, we don’t dare to look to the right, so the soldiers do not order us to return.

A mosque is in front of us, we park behind the mosque, in a less noticeable street. We turn off the car, step out. We get a weird feeling because such silence in such a big city is not something familiar and common. Peace and silence are breaking through the city, despite the state of war. The mosque stands alone, it is only a memory of the faith and hope of the people who lived there. Minaret sadly observes the vastness of human stupidity. The door to the minaret is open and we climb the winding stairs. It is not often to have the opportunity to climb a minaret. We do not dare to step on the upper balcony, we just hang our heads through the fence and we are confronted with a horrible sight. No wonder Agdam is called “Caucasian Hiroshima.” Are we humans really capable of so much hatred to destroy the greatest value we have? Why do we destroy something we are most afraid to lose? Destroy lives. 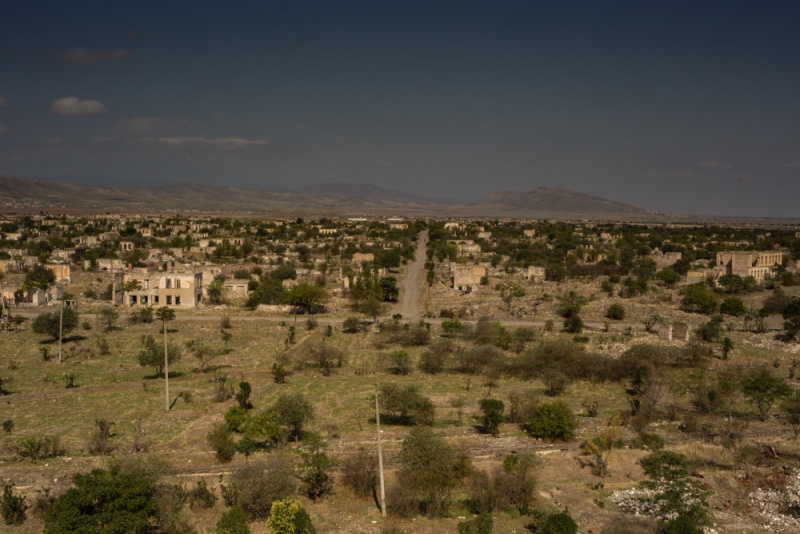 Shaken by what we have seen, we decide to give the city at least a spark of life. Even if there is no one else in the city. Let’s do this for those whom Agdam used to provide a home,  provide a life. To those who lost their lives there, their loved ones, their homes and their memories, which faded into the emptiness and silence of the ruins. We decided to hide between the ruins and, at dusk, screen the cartoons onto one of the ruins in the city. For all those children who used to live here and for all those who could live here today. If only their future was not taken away. We parked behind the demolished house so that the van is not visible from the road and the border, which is only a few hundred meters away. The houses are surrounded by ditches, bunkers. There are traces of warfare everywhere. It seems like it happened yesterday. The pleasant afternoon sun has coloured the greenery that covers the city’s footprints. The sunlight seems ashamed and trying to hide everything that humans have destroyed. It’s peaceful, only the sound of nature can be heard. Only imagination brings back sounds from the past when the city was still alive. Despite the military, the destruction, the horror that surrounds us, waiting for gloom is meditative. For the first time on the trip, we feel at such peace.

We relax quite well when the sound of military vehicles breaks the peace and quiet that has settled deep into our souls. More than 10 military trucks full of armed soldiers are suddenly in front of us. It turns out that bunkers still serve their purpose. The military vehicles are taken to deep trenches so they are not visible from the other side of the border. The same soldiers, who were waving and laughing at us at the intersection, came out of the vehicles. Without noticing us, they do their routine work. Like some kind of robots, they do what they were commanded to do. We realize when their routine is finished, it’s our turn. We wave to them and drive past them. They don’t stop us, surprisingly. We head out to find another projection location. On the road, we were stopped by the military police, who made it very clear, that we were not lost, that we were here for a reason. They took our passports and after some negotiation, they just didn’t take us to the police station. We were assigned a police escort to escort us out of town. Only when we got back to the main road did they return our passports. We had to drive towards the capital. They drove behind us for a while. They managed to prevent a piece of life returning to the city at least for a moment. The city remains dead. Even though the projection failed, the silence of the city will continue to tell us its story. And this one will never be forgotten.