"SELF" PROJECTION NO.6 and forgotten in time //Avetaranoc, Nagorno Karabakh//

We are still driving around Nagorno Karabach. We do not seem to be making progress as we drive along serpentine roads that wind between mountains and hinder the lives of locals. The capital Stepanakert looks new and stands out from the surrounding towns, villages that look forgotten in time. Stepanakert is the only town in Nagorno-Karabach that has been completely rebuilt since 1994 when the war ended. Huge patriotic posters are displayed everywhere in the city depicting the victory, might and invincibility of their army. The place looks artificial, soulless. We head towards Sushi, a location that tourists are allowed to visit. It is not long before the outlined path, awakens in us the rebellious spirit and leads us from the main road to a macadam path leading to an unknown destination. 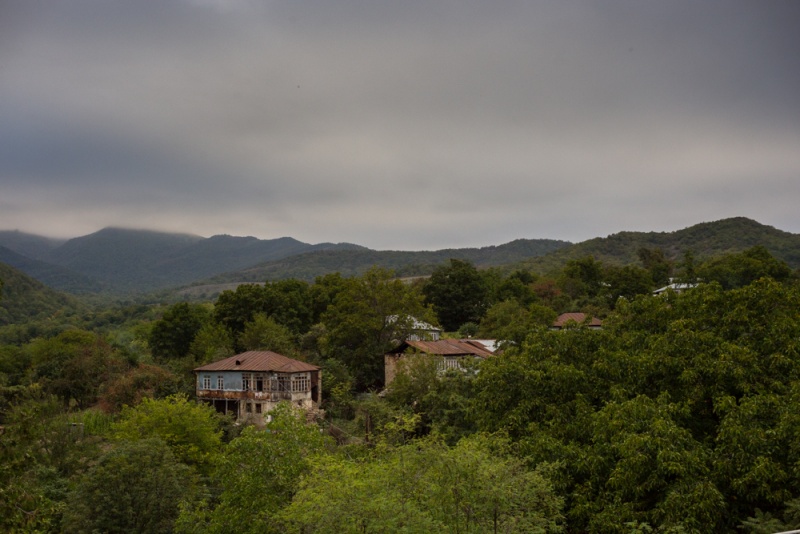 The road is really bad, but we still encounter quite a few cars along the way, which skilfully avoids the scars of the route. We’ve been driving for quite a while, but the miles on the meter just don’t want to move. It seems like the counter broke down or the time just stopped. After all, we finally see a few houses. Looking ahead we see a village, it looks forgotten. We are surprised by the number of people on the street, while we slowly drive through. The locals are staring at us. They don’t seem to be used to strangers. There is no end to their curiosity. 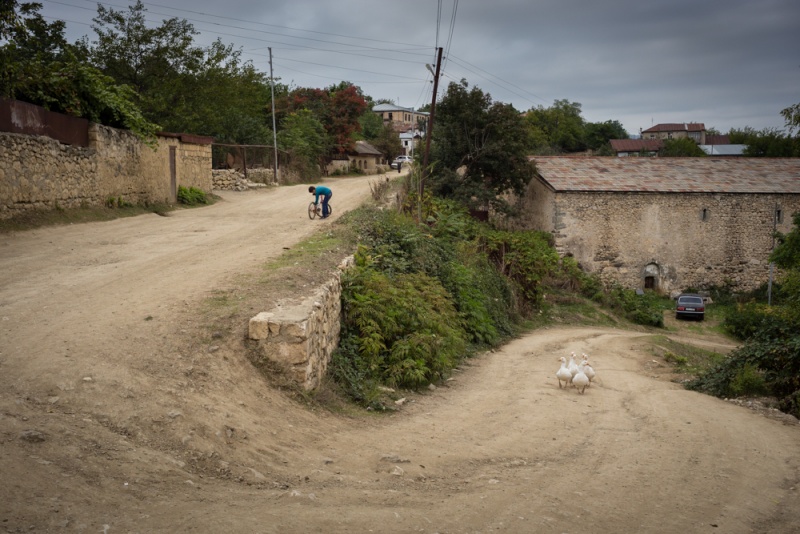 We arrive at the end of the village and in front of us stands a lonely damaged building on which is in Cyrillic written –  Cultural Centre. Broken windows, cracked, bullet-punched facades and locks on old wooden doors let us know that it has not been in operation for a long time. Yet it looks mighty. It is evident that it survived many things that marked it and at the same time gave it a sense of existence. Through the windows, one can see the remains of art that gave the villagers hope and meaning in the worst times. On the floor are harmonics, guitars and flags from different periods, which indicate the transformation of the country, the village and the people. In the corner of the room, light falls on an old piano, silently waiting for someone to play it again, but the dust mercilessly covers tunes that should echo. 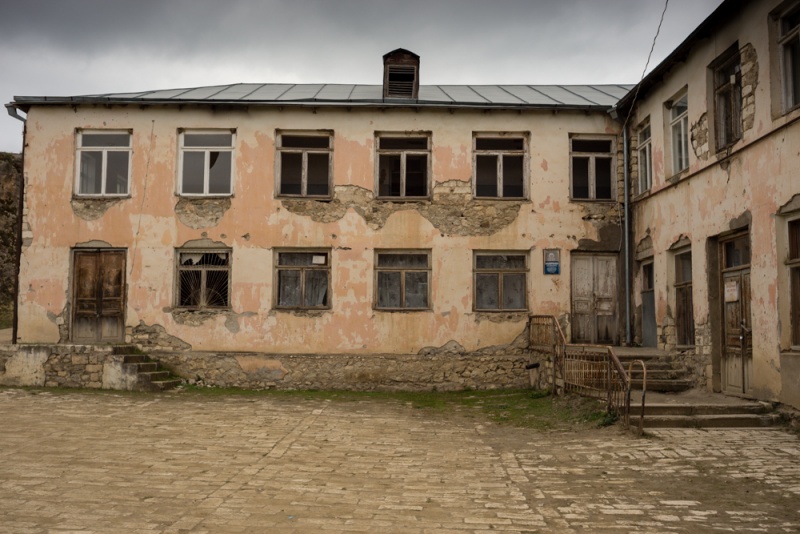 Through the broken window we see a large wall covered with pictures of soldiers who lost their lives in the war between 1989 and 1994. The fallen soldiers are decorated with plastic flowers. The Cultural Centre was damaged during the war. It has not opened its doors since. People remained in the village and life somehow didn’t move on. They look forgotten. Even though most of the village men fought in the war for independence, as they call it, they do not appear to have any benefits from it today. The village of Avetaranoc is only 20 km away from Stepanakert. The self-proclaimed state does not even take care of basic things like roads, health care, basic infrastructure for a seriously damaged village. If only they would be willing to revive the Cultural Centre and bring some joy back to the village, for the villagers, for at least a day, the troublesome and monotonous peasant lives would be enriched. The renovation is only visible in the capital and in places where tourists are allowed. For the rest of the country, they don’t seem to care. 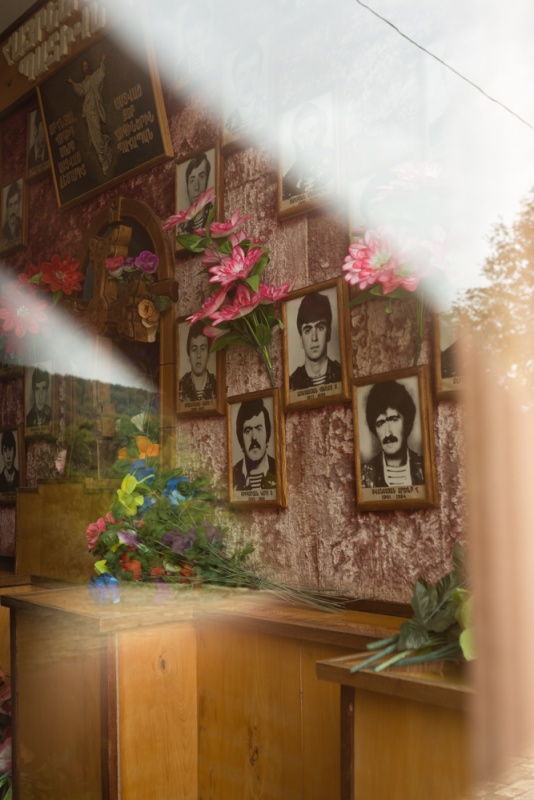 We visited an elementary school attended by more than 150 village children.  The hallways are full of paintings, statues of war heroes surrounded by flowers. The flowers probably haven’t been watered for quite some time. Our visit is the event of the year. In a moment it gets so crowded around us that we cannot continue to move around the school. No one speaks English, and communication in broken Russian does not get us very far. Fortunately, an English teacher comes by, to whom we explain that we would like to organize a movie theater in front of the Cultural Centre in the evening. What they cannot believe is that something will be happening at the Cultural Centre again after many years. Before leaving school, we promised to visit English lessons. Due to the excitement and screaming of children, communication in the English language, desired by the teacher, wasn’t possible. Immediately after the end of school, children are already curious about what we are doing in front of the Cultural Centre.It is still more than 4 hours until the screening. They seem to have nothing better to do than watch each our step carefully. In the evening, an unexpected large number of people attended the screening. 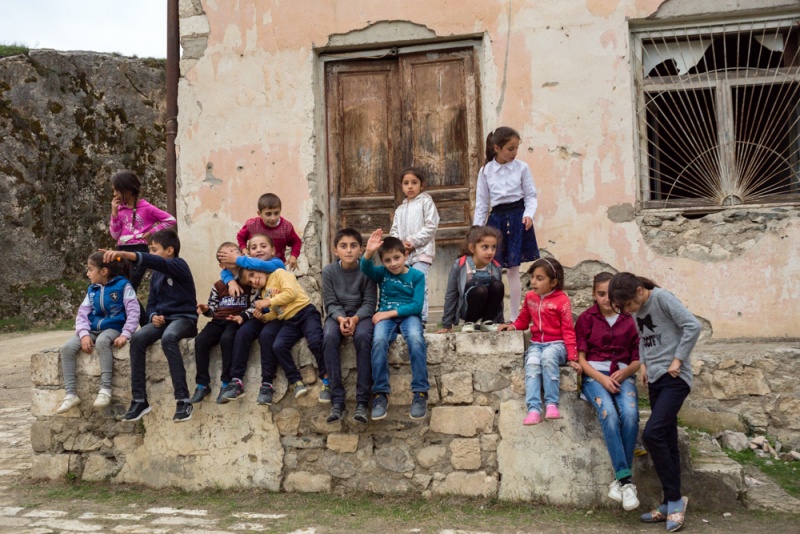 Much to our surprise, a lady with a huge bunch of keys came and opened the heavy, rusty main door of the Cultural Centre. The light in the lobby lights up and the Cultural Centre comes to life. Even though the screening is in front of the Centre, it looks as if you are back at an event at the Cultural Centre that villagers have been waiting for. The lady offers us electricity and kindly shows us two wires protruding from the wall in the lobby. There are no sockets left. Despite the “sparkling” electricity, we somehow manage to connect the cables and the cinema can begin.

We were showing animations for the kids, but it was nice to see that the adults also joined. The village was gathered next to the Cultural Centre. Forgotten in time, they again felt that this time was only theirs, a time that no one could take. But we have realized that it is not good to be stuck in time, to cling to the moments that pass quickly and are quickly forgotten. So let’s go ahead with/in time, the moments will remain in our hearts for quite some time.  At least until the next “only” projection, if not longer.