"SELF" PROJECTION NO.4 and when your home is not home anymore //TSEROVANI SETTLEMENT, GEORGIA//

We are privileged, being able to cross the border whenever we wish to and explore other people’s ways of living by doing so. We live and move fairly free.
Our path is not laid out before us, so we never really know where home will be tomorrow. As we wander around and have everything we truly need within a hand’s reach, we’re rethinking about the concept of home.
It’s interesting, how the more time one spends on the road, fewer material things are really needed. Considering the fact that we currently live in a van, most of the things that we thought were necessary, just became excessive and unneeded ballast. We started to value those few really important things. Surprisingly that’s a fairly small amount of items.

At home, we spend a lot of time hoarding things, which represent the sort of comfort to us as is dictated by our surroundings. Yet, we tend to stop connecting them with the concept of home and we quickly realize that home are people and not material things nor comfort, with which we are safely distanced from confronting our fears.

Home are people, who mean something to us, who understand us, who accept us as we are and because of whom we want to be better and happier individuals. They are the people, that truly care for us, who don’t wish us harm out of egoistic interests and for whom we not only take care of, but also for whom we honestly care.

Most importantly, home are the people, who selflessly hold up a mirror when we need to see ourselves as we truly are. The more time we spend on the road, the clearer image we have of who those people are for us. And like with material things, we also realize how much we value certain people.

This is even more clearly seen by those, who are truly in need, as they had to leave everything they’ve ever known in a moment. The losses went hand in hand with wars and conflicts, which they didn’t create. They were forced to leave everything they had worked for and worked on behind – whether they were necessary items or accumulated ballast. And all of those items loose value even quicker, when there is loss of loved ones. The ones, who represented home and security. In war, namely, everybody becomes a victim of the Greedy, who don’t care for the welfare of the people and can’t see past their own personal interests. 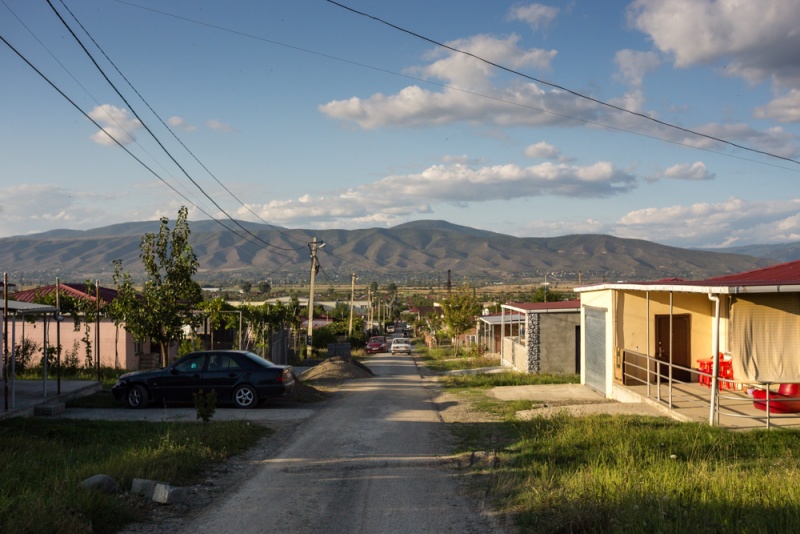 A bit before the capital city of Georgia, we found ourselves in the middle of nowhere, on the side of the highway we saw a village, made up of perfectly identical houses, built in a completely straight line. Red roofs and straight, poorly maintained roads gave us the feeling, that this place was not built by individuals hoping to live there, but that it was meant as a humble haven for all, who were forced to leave their real homes.

The refugee settlement Tserovani is currently the home of 5000 Ossetians, who fled Georgia in 2008 before the war for the largely unrecognized state of South Ossetia between Georgians and Russians. We will not go into the causes of conflict and the terrible war – we’ll leave that to others. The fact is that the war did happened and that the people drew the short straw. Inhabitants of both regions lost their homes, their loved ones and some even lost their lives. They were stripped of dignity and peace, the latter meaning much more to them than the interests of those, who had started the war. For the past 11 years they have lived in the settlement, which they call their new home. Their old home is gone, all that is left of it are memories. 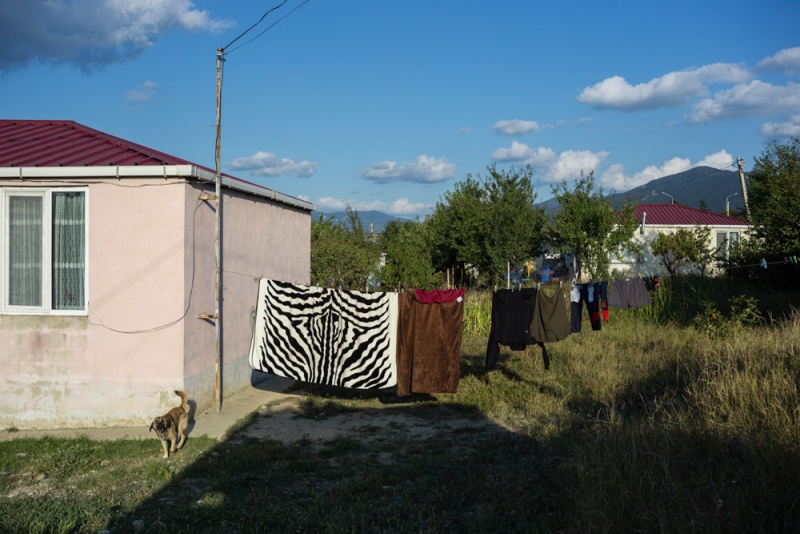 The abandoned homes were torn down, they no longer host residents nor provide space for the echoes of children’s laughter. Even if their wish was fulfilled and they could go back home (which is, unfortunately, impossible as the border is only a few kilometers away from the settlement), the building of their former home would no longer be home. The reminders of what was once there would reopen all the wounds, which have slowly been healing.

Nowadays they live unpretentious and most of them work in the capital city, Tbilisi. Children are playing on every corner; despite their plain lifestyle they have each other, while being connected by the bitter-sweet memories and pain.

We felt a bit lost as we drove down the roads, asking ourselves where to put up the cinema. When we had finally found a suitable stop, we had trouble communicating with others as to what we actually wanted. After a couple of failed attempts, we managed to find an administrative center, where one of the workers spoke a little English. 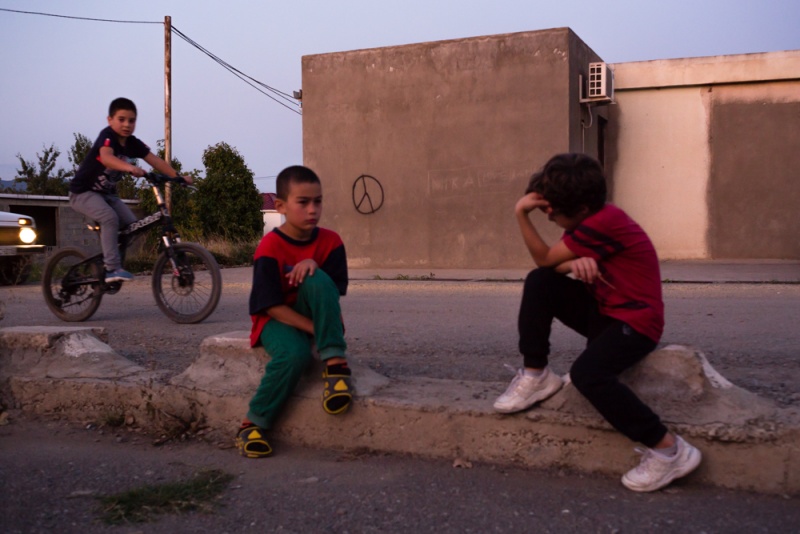 It was only a couple of hours before our wanted projection, when we managed to get our intentions through to the people; they quickly stepped together and helped us accomplish our mission. It seemed as though it was in their great interest to see this through and instead of looking for reasons, why it was impossible, they managed to find more reasons as to how to make it possible.

We agreed on the location, were given electricity from a near-by sports hall, as well as found a pair, who put together an announcement in Georgian regarding the location and time of the projection for the children. The text was printed on more than 50 A4 papers and the secretary cut each one of them in 3 pieces with a ruler, so we ended up with around 150 fliers. We sat on the Momo and began with marketing. While driving, we handed a flier to whomever crossed our path.

As usual the children were very excited to hear about the screening and quickly shared the news with their friends and family. A good hour before the start, we returned to the venue and many children were already waiting impatiently. We didn’t even have to ask for help as the children began putting up the projection self initiatively. We started screening as soon as dusk fell. The audience was not made up only of children, but there were also many adults. As we saw them all together, we felt their connection and homeliness, which they share with each other, despite all the bad things they went through. 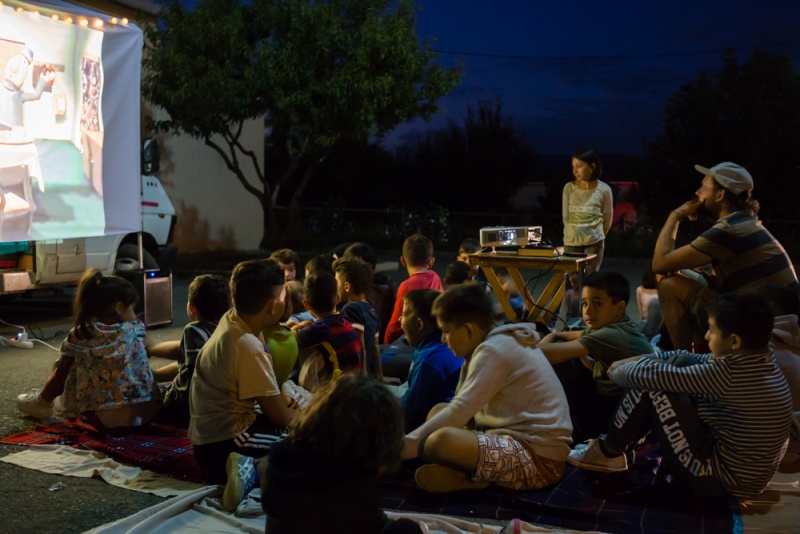 There seemed to be no end to their gratitude, as they walked up to us one by one in order to thank us and shake our hands, before helping us pack our things. It seems as though they were the ones that gave us something, not the other way around.

That night, the refugee settlement Tserovani became our home. Thinking about how home is not something to be taken for granted, we asked ourselves where home will be tomorrow.