"SELF" PROJECTION NO.3 and forgotten soviet solder //CHIATURA, GEORGIA//

Chiatura, a city, which resembles a setting in an apocalyptic film, is surrounded by tall, dark mountains, whose black shadow falls upon the lives of miners and their families, who look up to the sky, despite having quit dreaming about a better tomorrow. Here lies one of the biggest extraction sites of manganese. The extraction of manganese ore used to be a thriving business and represented 60 % of Georgian production. Today, however, it fails to supply a decent income for the miners and contribute to the development of their hometown, while also symbolizing fear of the miner’s families, questioning the safe return of the workers from the mines. Working conditions are inhumane and up until now, there hasn’t been a single year without fatalities. The former President of Georgia, Mikheil Saakashvili, abolished the inspectorate for the safety of the mines in order to attract foreign investors. Although the inspectorates have been re-initiated in 2013, there hasn’t been any improvement in the working conditions. 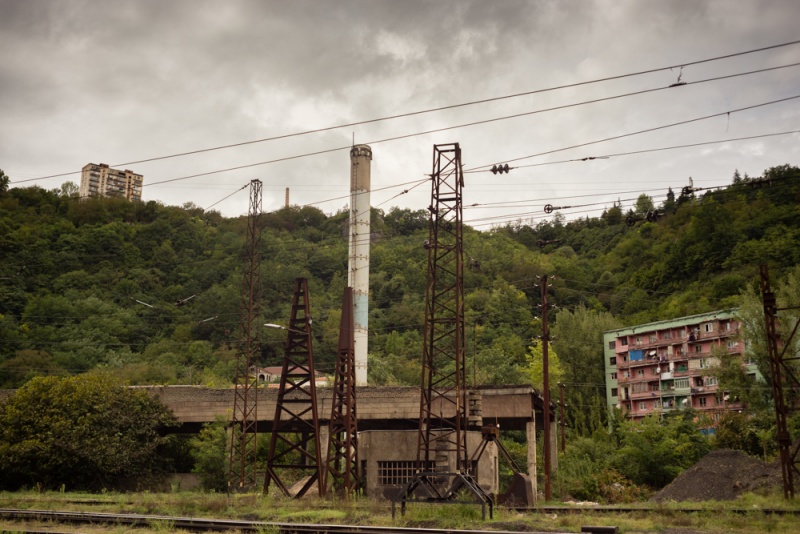 After a long and exhausting drive on the road, which resembled Swiss cheese, Chiatura welcomed us with a worn-out apartment complex, where a big statue of a Soviet soldier stood, looking upon the city, which lay in the valley, while literally counting down the days until it’s collapse. The statue seems like a sad reminder of the days, when the Soviet Union still invested in the development of Chiatura and the blossoming of the city, known in the Soviet Union by its production.  These days, the soldier stands almost forgotten, lonely and mainly disappointed. It seems as if everything, that the soldier fought for is, nowadays, of no value. The surrounding blocks of flats appear to be abandoned and in very poor condition, but when looked at closely, you could see that they are full of life. 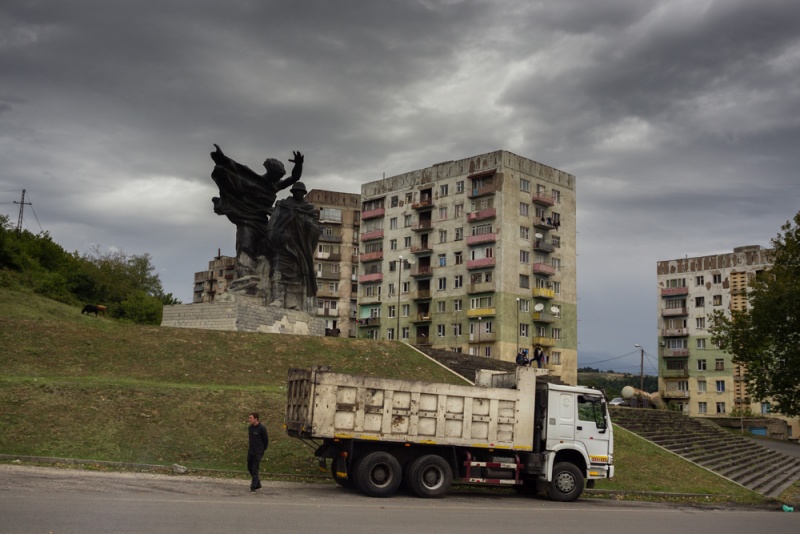 After the fall of the Soviet Union, the city stopped receiving any sort of financial help, which left its toll on the economic stagnation. Ever since, Chiatura practically hasn’t changed. Only time has left its mark on the city – what once represented progress and a decent life, is now left to break down, rust and decay.

The corruption and greed of politicians trample on the little dignity, that the people of Chiatura have left, despite the fact, that the mines are still the main source of livelihood for most of the 16000 inhabitants.

Every day, the miners would drive to work on old and worn out gondolas, which were built by Stalin in 1953, have never been renewed nor sanitized, yet they still manage to facilitate and shorten the long working days of the miners. 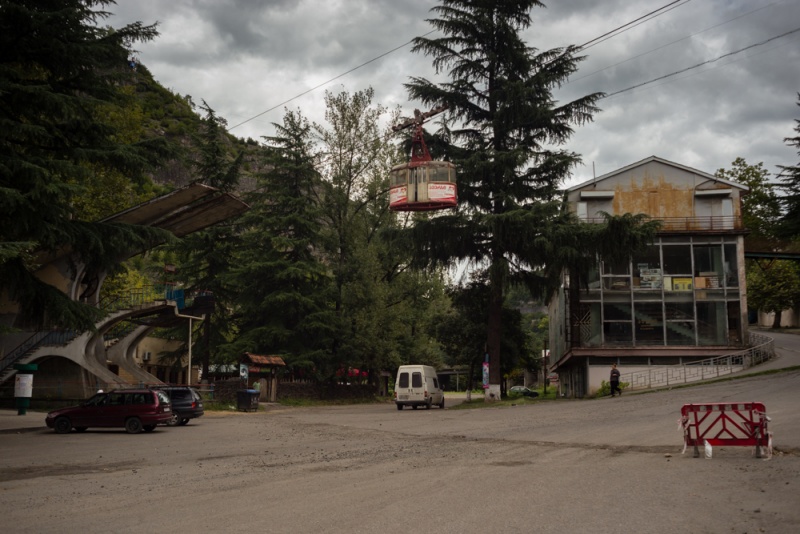 Shortly before our visit to Chiatura, these gondolas were stopped forever, due to the excessive pressure of the organizations for rights and safety of workers. Now, the workers have to drive around with busses, which prolongs their drive by two hours. In the meantime, the gondolas sway in the wind like metal coffins and like the forgotten soldier, remind the residents of Chiatura, that the inevitable end is coming. Scientist estimate, that the quantity of manganese should last another 15 years. 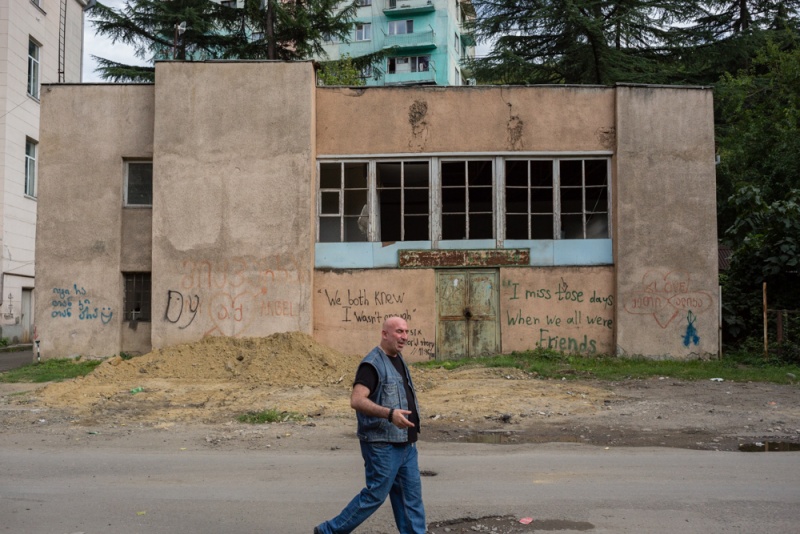 We decide to bring the soldier back to life – even if for a second – and to give the children a magical moment, despite their uncertain future. We parked the van by the big statue and MoMo looks ridiculously small and humble. Soon, a small crowd gathers, eager in what is to happen and interested in who dared to park their car by the statue. We quickly introduce ourselves and explain that as soon as the sun sets, we are preparing a projection for the children. Surprised and pleased, that something will happen in the sleepy town, they run into the buildings to spread the news among other children.

We prepare everything we need; the statue of the soldier has been encircled with the smell of popcorn and the children are slowly gathering. The growing crowd sparks with beauty of the eager children.

The expectations are of nothing more than a simple and humble as projection of cartoons on a wide-spread bedsheet, and a worn-out van, which blends in well with the surroundings. 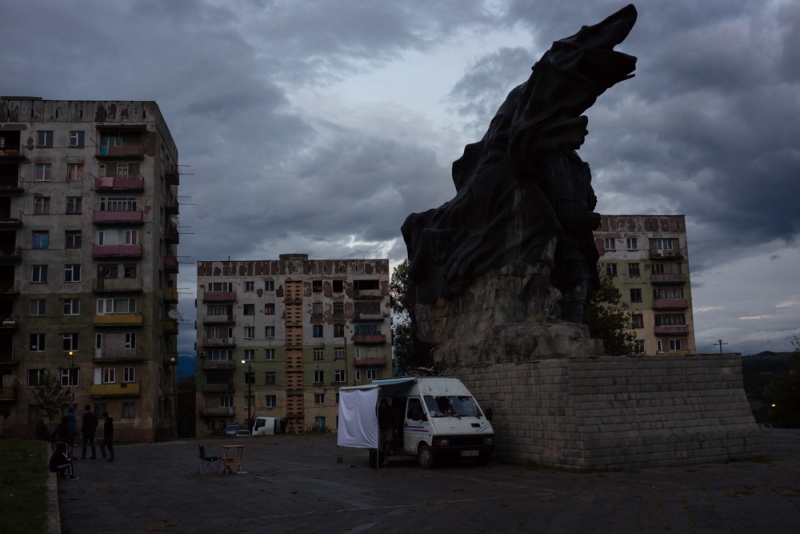 It was not only the children that came. Among the crowd were also youngsters and those a bit older, who still remember gathering during the times, when the stationary soldier, who now served as shelter to our modest cinema on the wheels, still meant something. There were moments, when it seemed as if the laughter of the children entered the ears of the soldier, which drew a small smile on his face.

When the projection was over, some younger watchers approached us and asked, is they could watch a youth Georgian series, which is very popular at the moment. It was interesting to see what the youth of Chiatura could relate to, what they value and mostly, what they strive for. 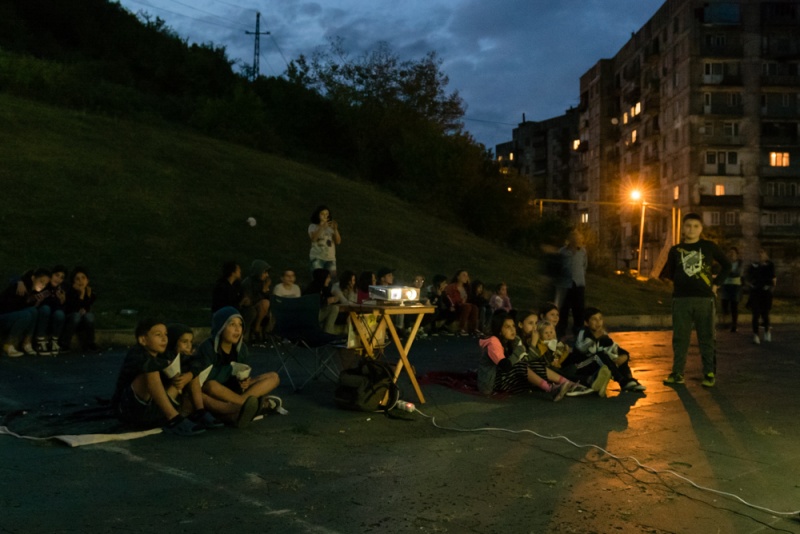 The rather sad thing was, that their home didn’t enable them this and that they don’t really have a future in Chiatura. We watched until the engine ran out of fuel and we ran out of electricity. Then silence prevailed.

The soldier was still looking in the same direction, yet we felt transience, which came as a reminder that nothing was eternal and that it’s moments like this that count. Even if they don’t last long. All that matters is, that they are honest and come from the heart. Bearing this in mind, we parted ways and despite the fact, that they have a difficult future ahead, we recognized courage and hope in them.

As for the soldier – we bought him back to life, even if only for a moment, and he showed us the way onward to our next »self« projection.