"SELF" PROJECTION NO.2 AND NOTHING IS FAR ENOUGH //USHGULI, GEORGIA//

After a quick crossing of Turkey, for which we will take more time on our return, we enter Georgia. The chaotic border, it is not clear to us what the protocol is, and above all, that exciting feeling of a child’s expectation of something unknown, blood rushes through our veins and raises our pulse. As soon as we cross the border, a handful of middle-aged men jump in front of our van, with home-made ID cards hanging around their necks and supposedly convincing us they are officials. Of course, we believe them, I do not know how much we overpaid the obligatory  Georgian car insurance. We continue our journey along a road that is much worse off than the roads we are used to from Turkey. We find out very quickly that the insurance, which we have been told is only possible to buy at the border, sells at every turn. And we would rather not mention the price difference. We arrive at the town of Batumi, which lies just off the Black Sea. We didn’t stay long in Batumi, so we can’t really write much, except that the city is a mix of all possible architectural styles, from old socialist blocks to modern glass buildings, ambitious attempts to follow modern trends and directions dictated by the West. After a long and hot Turkey, we need rest and, above all, escape from western reality. Escape from all that has been accumulated over the last year at home, and most of all escape from ourselves. And where else to escape, as in the most remote village in Europe. Ushguli village lies at an altitude of 2000 meters below the mighty mountains that are the border between Georgia and Russia. 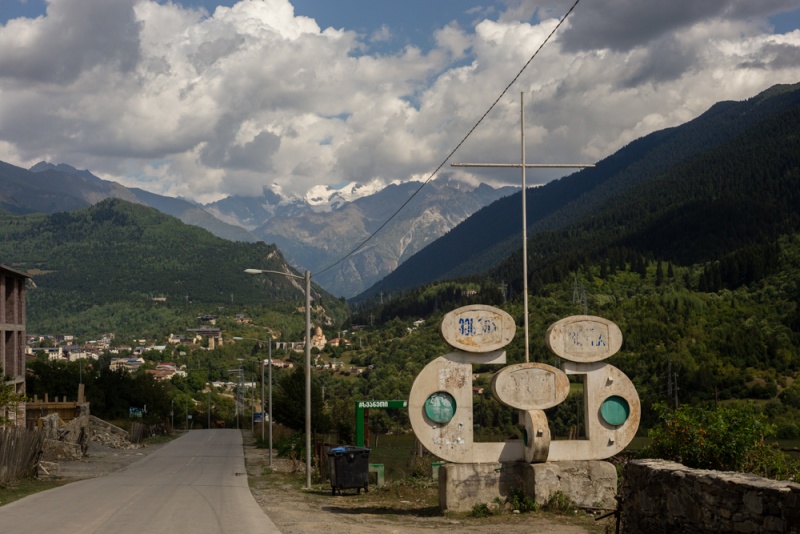 In the last major settlement Mestia, which is the starting point for Ushguli, about 50 km away, we ask if it is possible to drive to this remote village with our van. Locals all claim that we only get there with a 4×4 vehicle and suggest the only option is to rent a jeep, which would cost us around € 80. Not only is our van a means of transportation, but it is also our home and mobile cinema. We decide to try our luck. In the worst-case scenario, we will turn around and return to Mestia. We weren’t the only ones thinking in that direction. We meet a couple from Switzerland who has been travelling with their home on wheels for a year and is not planning to return home anytime soon. The Swiss couple also ignored the locals’ warnings and decided to try their luck. We became more numerous and the hope of success became stronger. We are in a situation where, if we get stuck in the mud, we pull each other out. United, we’re on our way. It was all too soon when we realized why all the warnings. The road was no longer road, it became everything else. We drove through mud, through rivers, through deep puddles, and along a very narrow road that the view from the passenger seat deep into the abyss, casts doubt on us, why driving this route was even necessary. When the road was narrowest, the muddiest, more jeeps drove towards us, which all had a 4×4 drive. We were on the side of the road where it was necessary, to move away and give space, towards a cliff. This adrenaline ride took us just under five hours before we saw the 800-year-old village with its characteristic stone towers, which made Ushguli today the only Georgian village never occupied. We felt relieved, but at the same time worried about going back the same route.

The view of the surrounding mountains is fantastic and we get the feeling that we have come to the end of the world. Until we drove to the village. There are accommodations for tourists, shops and restaurants at every step. And almost no locals. There were few tourists, so everything seemed empty and, above all, unnecessary. In one of the stores, we got everything we needed and headed for the valley leading to the 5200 m high Shkhara Glacier, which borders Russia. We were alone here with a view stolen from a postcard. A Soviet jeep in very poor condition, full of tourists, drove past us every so often, eager Georgians, mostly from Tbilisi, drove tourists under the glacier. Or they passed us on horseback, carrying two tourists at the same time. We somehow imagined that it would be full of natives who still live simple lives far from the world where simple, basic human values ​​have long been forgotten and replaced by greed, selfishness and fear. We hoped that we would so far from civilization, escape everything that hurts and pushes us away from our essence. The village, however, was full of people who wanted to make a quick living. It is not easy for them, the decline of Russian tourists, due to poor relations between the two countries and conflicts over Abkhazia and Ossetia, has greatly impaired their earnings. Some children were seen in the village. For the most part, they sold souvenirs in modest stands or sat bored in the mountain sun. We decided to screen them an animated movie at our idyllic temporary home. In the morning, we headed to the village, a 15-minute walk from our location and let the children know the location and hour of the projection, our mobile cinema. Children were interested and gladly accepted the invitation. 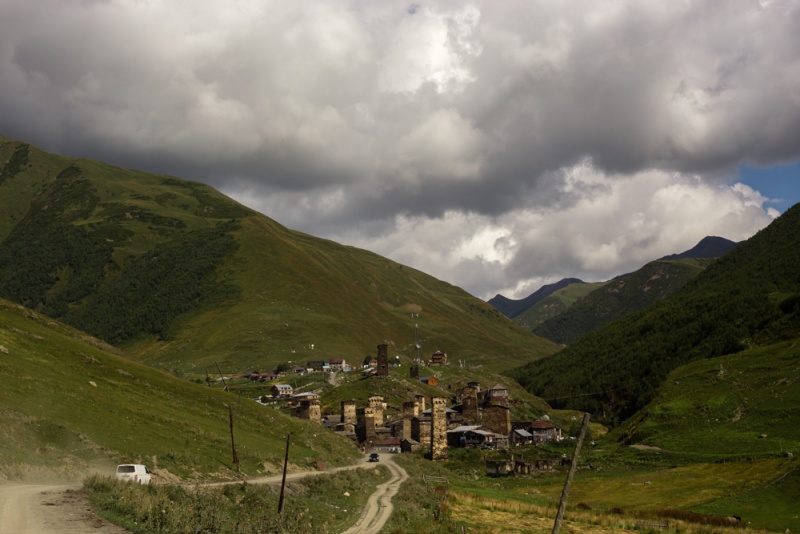 The projection time was approaching, it was really cold outside. One can feel the proximity of the glacier, the wind carries chill down the valley. We are not sure how many children will come at all, but at 8:00 pm we see 3 children approaching our mobile cinema. The popcorn is done, the projection is ready and the blankets are prepared as well. Smiling and curious children look forward to the projection. They grab the popcorn and, as they wait for the screening, explain to us how they spend their summers in Ushguli with their parents, coming together to serve bread. They are all from Tbilisi or the surrounding places. Every summer, work is switched for holidays. There are no children activities in the village, which is why, there was an additional enthusiasm for the projection and, above all, that someone has done their best and prepared something for them, the children. The projection begins, and despite the fact that only 3 are present, the laughter echoes through the valley and sweeps away at least a little of the cold that the mighty glacier sends us. It is nice to see that children are always just children and, despite being forced to swap play and childhood privileges for the adult world and work. They still know how to live in their children’s world. In a children’s world, that can teach us, what we came to look for in Ushguli. Even though, it was not as we had imagined. As we leave the village the next day, children and their parents, who usually see only the earnings in tourists, wave and smile of farewell. But we come back with the realization that wherever we land, even if it is the most remote village, we do not escape ourselves and to what hurts us at home. However, if we are open and look deeper through children’s eyes, we can only learn how to face and find our inner peace, wherever we are and whatever we do. Let’s keep the children honesty inside of us. With that in mind, we are already looking forward to the next “only” projection.