"SELF" PROJECTION NO.1 and Frightened Artists //STOLIPINOVO, BULGARIA//

The moment we left Croatia, with our mobile cinema, and entered Serbia, at a place where it is impossible to miss the inscription that we are leaving the European Union, finally the anxious feeling that has been accompanying us in our “promised land”, has subsided. Our mobile cinema, 1988, barely underwent a technical inspection at home due to its peeling color, but suddenly it no longer aroused attention and stopped inviting blatant glances directed at it’s “inappropriateness”, which corrupts the appearance of the façade, which conceals the foundations and rots in the secret of egocentric self-images. Everything that makes us weird and different at home, has become something ordinary. Accustomed to being unburdened by unimportant things, that give others a sense of worth, we are brought to the Bulgarian border. We look at the board where it says welcome to the European Union. That anxious feeling reappears, but very quickly we find out that Bulgaria is far from what we imagined, when a blue signboard with who knows how many yellow stars pops past us. The Bulgarians are not trying to hide who they really are, and the senselessness of pretending is soon felt at the first gas station next to one of the many dilapidated and abandoned factories that during communism enabled the locals to earn a living. It doesn’t take long for a gas station employee to realize we’re tourists, which costs us an extra EUR10 for gasoline. When I asked where is the tariff written, he replies that nothing is written and he is the one to set the rules. Despite the bitter taste that we got deceived, there is not much we can do, so we continue our journey towards the second-largest city in Bulgaria – Plovdiv. 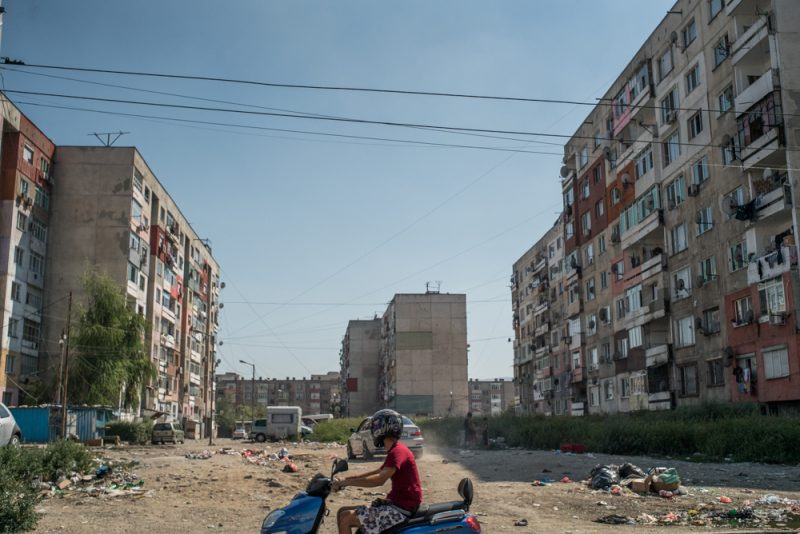 A city boasting the title European Capital of Culture 2019 doesn’t look even a bit cultural. It is true that they have very old and well-regarded cultural institutions, but the city is just a huge construction site at every turn. When I ask a 37-year-old Nikolaj, a native who is a sociologist, if the reason for all these renovations is the money they received with this newly acquired title, he answers that this is not the case and that the title is just another opportunity for corruption. I didn’t drill ahead, we finished with this statement. Not far from the centre is the part of the city where the vast majority of the Bulgarians of Plovdiv has never set foot before. A place that evokes fear and horror, a place so dangerous that you are unlikely to come back alive is the place and home of 50,000 Roma living in inhumane conditions. So say the locals, full of fear and prejudice. According to a conversation with  Nikolaj, who for the first time visited this dangerous neighbourhood Stolipinovo five years ago, more than 90% of the population are not Roma at all, but are, as they say, the original successors of the Ottoman Turks, who still speak old Ottoman Turkish. Because of their way of life and humanitarian aid funding, they are called Roma. The biggest ghetto in Europe is spoiling the look of the European Union, since the fact that most settlements still do not have sewage systems and the rules of a “modern and socialized” society do not apply there, throws a poor reputation on both, Bulgaria and the European Union, which devotes a good portion of its funds to the “development” of Bulgaria. Nikolaj and girlfriend Hannah, who had moved to Bulgaria from England, which is quite unusual given the fact that most Bulgarians want to emigrate to England, been visiting Stolipinovo with a mission to show the beautiful culture and surroundings of the neighborhood, with the desire to alleviate fear and prejudice, which in most cases are unfounded and unjust. 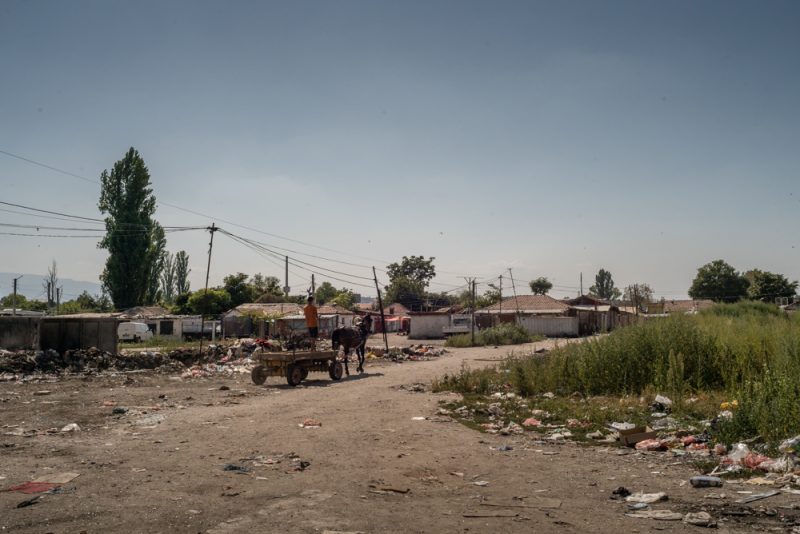 I have to admit that our Momo Cinema blends in with the environment. For the moment it is not clear whether we are driving through the streets or through a dump. But it is immediately clear that Stolipinovo is full of life at every turn. Everyone is on the street, and all aspects of life can be seen. From smiling kids, to addicts, stray dogs barking freely at passers-by, “suspicious” young men standing proudly by their BMWs and especially those trying to make a living in various ways. Without unnecessary bureaucracy, inspections and norms of authority. We drive to the poorest area and when the kids see our van, which says MoMo Cinema in handwritten letters, they start running by the car and shout “Momo, Momo, Momo, …”. Since the wiring is very low, Nikolaj gets out of the van and checks if we can get under it. Unfortunately, we have to remove the bikes we transport on the van’s roof. As I tried to untie the gourd on the roof, a huge crowd gathered around the van and a whole lot of excitement could be seen. I gave the bikes to Nikolaj, he hands them to a middle-aged gentleman who takes them home with the promise that he will save them until we leave. He disappears with our bikes in the crowd, and we manage to continue our journey to the smaller square, just a few inches below the wiring. We have a hard time turning the van around as there is not much space, and we were accompanied by a large group of children. People are friendly, they help us every step of the way. We park the van and start preparing the cinema. Children are becoming more and more anxious. The shouting is louder “Momo, Momo, Momo …” and the situation gets so loud that our ears hurt.  The locals borrow us electricity and the multimedia is ready. Only the speaker does not want to connect and the anxious young visitors get even louder. The street is full of screaming children, who await the start of the screening. The speaker is finally connected and the projection of Pat and Mat begins. 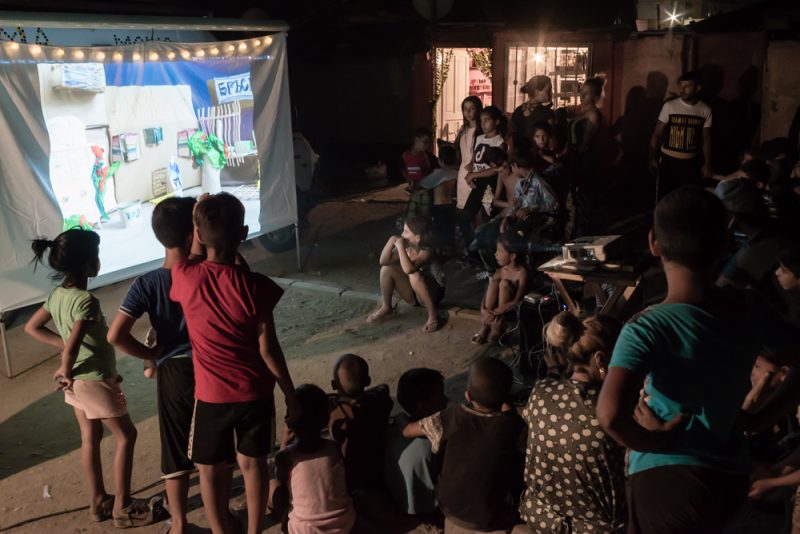 The shouting calms down, the tension relaxes. Children surrender with a smile to moving pictures. Some leave, while others shoot a projection with their cell phones so they can watch it again later. Good thing we are in Stolipinovo so that some inspector does not accuse them of piracy. How nice to see children who are comfortable, satisfied with simplicity and modesty. How very little is needed to attract smiles and gratitude on their faces? Somehow, we cannot go beyond the bitter taste of the situation at home, where the content and purpose are becoming less and less important, and in the first place are self-promotion and position in society, as well as social approval. All just to keep the facade shiny and mighty. There is so much to be learned from the people who truly live in misery who, instead of building and maintaining their facades, live simply. And it is life that ultimately matters. We say goodbye, full of beautiful feelings and, above all, full of life. We are grateful for the experience that we were able to turn our backs to fear, at least a moment. We are returning on the same route and the gentleman who took our bikes is waiting for us to help us tie them back to the roof. We wave goodbye. On the outskirts of the neighbourhood, Nikolaj reaches to fasten seat belt with a sour smile on his face and says we are leaving the area of ​​freedom. Momo Cinema, however, goes on a road towards a new “self” projection.